A sampler from North Wales

I did say when I first started this blog that it would most probably be intermittent because I can only feature samplers when they appear!  Well this morning this one turned up on an auction feed - It is for sale in Pennsylvania!  Had it been here in the UK I might well have been tempted to put a bid on it!

It is listed as a pictorial sampler as it has very little lettering, but the mixture of motifs alerted me as soon as I saw it!  First of all I recognised the scene of the side elevation house with it field full of sheep, because I have a sampler with this very same scene which I know was worked in North Wales.  I used this scene on a small reproduction sampler - 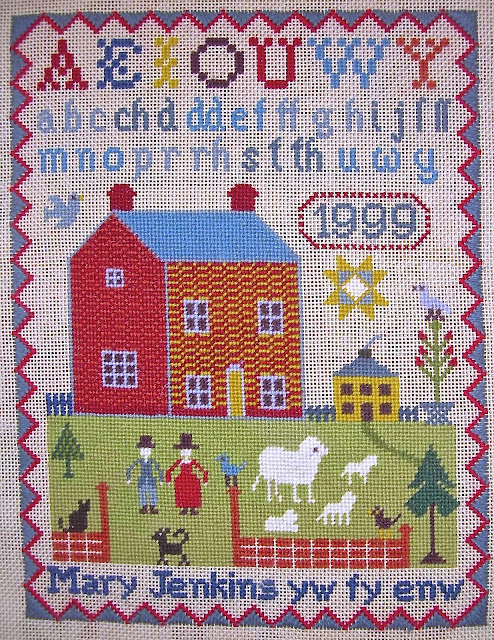 My original sampler has figures but I have also added a few little extras to this reproduction, the cat being one of them! I have also included the Welsh alphabet which is rarely if ever shown on Welsh samplers because the language was not encouraged at all at that time.

This auction sampler has so many things that drew it to my attention!  Firstly, I recognised the house scene, but then it also had a church and a ship, both of which are a favourite motifs on Welsh samplers.  Of course it also has the Tower of Babel which is common on all samplers and also some Berlin Woolwork patterns which were very often mixed in with traditional patterns on Welsh samplers in the latter half of the 19th century.

By far the most interesting motif is the so called "Hardgey Light" which I believe might be Bardsey Lighthouse which is situated off the coast of North Wales? I can't recall seeing a lighthouse on a Welsh sampler before, especially one that is named.  Such a shame that it is so far from Welsh shores now?  I would love it to return to its homeland!

Posted by Little Welsh Quilts and other traditions at 02:05 4 comments:

Two samplers - but where are they from?

Well, it has been quite a while since I posted, but I did say at the outset that this blog would be spasmodic.  Still I do feel bad that it has been so long.

I would like to show you two samplers, one an original and the other a sampler inspired by an old sampler.

The first sampler is in the collection of St. Fagan's, the Welsh National History Museum. This museum keeps changing its name for some reason.  It was first known as the Welsh Folk Museum, which I think is a much better name and then the Museum of Welsh Life.  Goodness knows what they will call it next?  However, they hold a very large collection of samplers and some are online at the Gathering the Jewels website - isn't that a lovely name for a site? 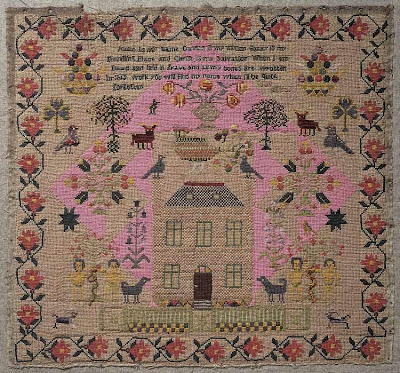 The Museum has credited the sampler as being made in Clunderwen in Pembrokeshire.  However, the inscription is -

Anne is my name Davies is my nation Quay is my
Dwelling Place and Christ is my Salvation.
When I am Dead and laid in grave and all my bones are wrotten
In this work you'll find my name when I'll be quite
forgotten.
1889. Aged 9.

Where is Quay?  Could it be Newquay in Cardiganshire? 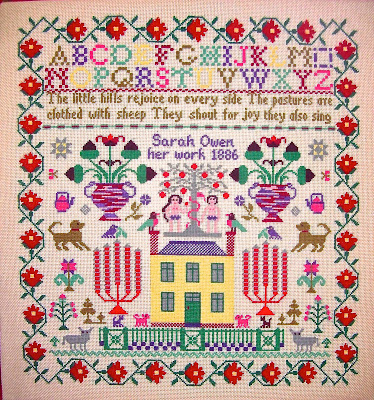 It was only a small picture in a room setting but I knew instantly that it was a Welsh sampler and set about trying to chart a version of it with the aid of a magnifying glass.

You will see that it has the same border as the first sampler and a similar yellow house though the proportions of roof, doors and windows are not quite the same.  However, the fence and forecourt are on both samplers and though they don't share many motifs, they are ones found regularly on Welsh samplers.

It wouldn't have been fair to do an exact copy of someones sampler and neither could I because I was working under certain difficulties.  The colours were quite clear but inevitably there are design changes, however, I feel that it catches the spirit of the original and I greatly enjoyed the challenge of capturing that.

The verse I chose is appropriate to Wales as our hills and pastures are clothed with sheep as well as mist and lots of rain, especially at the moment!

Posted by Little Welsh Quilts and other traditions at 06:32 3 comments:

I am departing from the "folk art" aspect of this blog to talk about a remarkable group of Welsh samplers.  They haven't any of the motifs I have come to associate with Welsh samplers - they are quite unique and very easily recognised.

Pontypool was an important industrial centre in South East Wales and had numerous schools listed in 19th century Trade Directories, S. Westbrook's Schools being one of them.

In my years studying samplers I think I have identified around six of these samplers, some are in museum collections, others in private ownership and one is for sale at the moment.  Another is on Page 161 of the new sampler book by Elizabeth Feller published by Needleprint.  This is the link to the Needleprint site where you can order the book and flick through the preview pages and see this sampler.

Though I  haven't managed to access images of them all, here are three to give you a flavour.  I will try and bring others to you in future posts.


The above sampler is for sale and if you follow this link to madelena.com You will be able to see more  detailed pictures showing the intricate stitchery.

Pontypool was famous for its Chinoiserie decoration on tin and if you study one of its famous trays their patterns may well have been the source of some of the Chinese scenes on these samplers?


And what of the balloons?  According to the Madelena site who have done some research, Charles Green, the celebrated UK balloonist, made his 200th ascent in 1835. The following year he made man’s first ever cross channel flight.  So this seems a good reason for the balloon's appearance on these samplers?

Posted by Little Welsh Quilts and other traditions at 14:07 3 comments:

I thought I would start a new year by showing you some samplers I have sewn based on old Welsh originals. I will feature them one by one in future posts together with the original sampler. 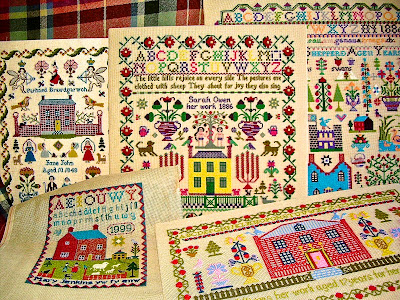 They are all worked on canvas with wool as were the originals and I have used Appletons Crewel wool on single canvas, not the double canvas on which most were worked because I didn't want them to be as big.  Some of the originals are very big indeed but of course they can of  be worked on a larger canvas.

I sewed these samplers quite a few years ago after charting them on graph paper.  I did this mainly for my own enjoyment, though I did lend the rather dog eared charts to some of my students as I was then teaching embroidery in Adult Education classes.  I had a vague notion of maybe doing a more professional job, but though I bought a cross stitch programme for my computer, I only really tinkered with it and never produced a whole chart.  After all where was the market for Welsh samplers?

I started this blog mainly to record what I have learnt about Welsh samplers over the years.  I thought it would be of interest to anyone studying them now or in the future. I also wanted to help to give them an identity because, unless they have some words of Welsh, they just get mixed in with English samplers.

Before I embark on a full chart maybe it would be best to start with a collection of motifs seen regularly on Welsh samplers, perhaps linking them to a particular school or area of Wales?  That would be more in line with the reasons for starting this blog.

I'm thinking on the hoof here as I have just changed from a pc to a Mac so will need a new programme. I would appreciate your feedback on this.


Posted by Little Welsh Quilts and other traditions at 01:48 9 comments:

Carmarthen, the town and county have already been mentioned quite a few times on this blog and I am fairly sure they will crop up many times in the future.  It is an area in South West Wales which has a rich textile history and thousands of samplers were sewn there in the 19th century.

Many of its samplers have a pair of very large birds, sometimes the predominant motif but also accompanied by other major elements.  I am not sure where the pattern originated or what sort of birds they are but they are certainly distinctive.

These are some of the samplers - all come from around the town of Carmarthen and there are many links which can be recognised.

I have more of these on file and they will appear when I manage to digitalise the images.

Posted by Little Welsh Quilts and other traditions at 05:39 3 comments:

It seem that samplers are like buses, when one comes along, others follow. Here is another sampler featuring Wrexham Church which is full of interesting content and favourite "Welsh" motifs. 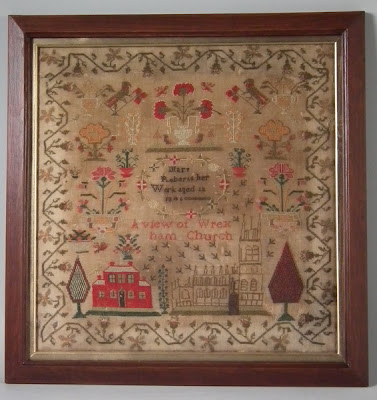 Posted by Little Welsh Quilts and other traditions at 08:59 1 comment:

From just over the Border!

I realise that sampler research isn't for everyone, just a few of us anoraks, but my intention is to record what I know about Welsh samplers so that anyone interested can learn about them with me.  No book can really compete with the Internet as a resource, because a book is restricted by the pictures that can be used, which also have to be of high quality.  The Internet allows pictures of all quality to used freely.

So I was very excited when I found this sampler on Pinterest recently - let me try and explain its significance.


At first glance it's rather nondescript but it really made me sit up and take notice.  It was made in Dawley which is in Shropshire just on the border with England in 1745, but it contains motifs that were used regularly on Welsh samplers more than a hundred years later

I have always said that the motifs on Welsh samplers weren't Welsh but that it's their repetitive use on so many samplers in Wales that indicates Welshness. Here is some proof! 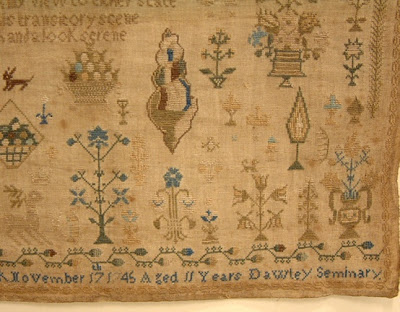 This English sampler, albeit from a place very close to Wales, contains sampler motifs, mostly likely taken originally from a pattern book, these then spread across the border into Wales and were constantly repeated until they became endemic.

Posted by Little Welsh Quilts and other traditions at 06:24 3 comments:

Little Welsh Quilts and other traditions